I thought this is interesting: Mazda ad on Facebook showing CarPlay very prominently on the 2018 Mazda6‘s dash. I think they’re proud of finally being on the CarPlay bandwagon, and want to cement in buyers’ minds that new Mazdas do have CarPlay. 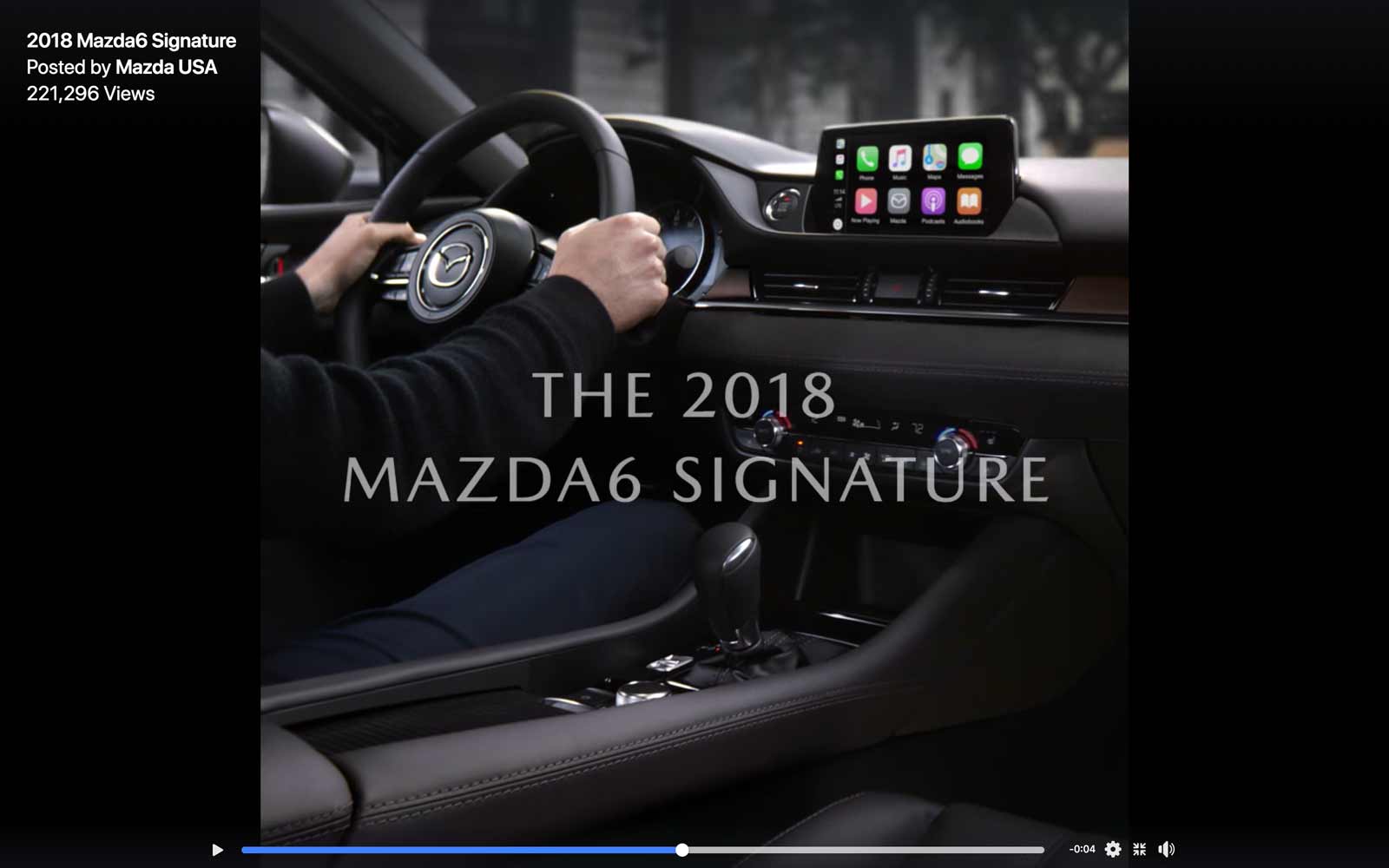 It was a long stretch where Mazda was the only major manufacturer that didn’t offer CarPlay. Months ago they put that bad fact to bed and started offering it on new models.

I’d put it down to Mazda being a very small car company compared to every other player, and simply not having the manpower to make CarPlay happen while trying to get new cars into its lineup.

What we’ve been waiting for has finally happened! Mazda announced last week that they’re now offering a Mazda Carplay retrofit in the US for all 2014 and up vehicles with their Mazda CONNECT infotainment system.

The update has a suggested retail of $199 + labor and you’ll have to bring your vehicle into a dealer to get the work done. Mazda notes the Carplay upgrade takes a couple hours to complete, so you’re likely looking at a total cost around $400 or so.

The upgrade includes both new software and hardware components as well as a faster, 2.1 amp USB port and the latest version of Mazda CONNECT.

Mazda introduced the CONNECT infotainment system in 2014 across their entire lineup, so if you’ve recently purchased a Mazda3, Mazda2, Mazda6, MX-5, CX-5, CX-9, or CX-3, you shouldn’t have a problem getting the upgrade.

And don’t forget that if you bought a 2018 Mazda6 this year, Mazda will upgrade your CONNECT system with CarPlay at no cost!

Mazda is pretty late to the CarPlay game, but with this latest offering, they’re jumping straight into the deep end. Both Ford and Hyundai offer CarPlay upgrades in certain vehicles, but no other auto maker is offering the upgrades for so many different models and years.

UPDATE: Mazda announced late in November that they now offers CarPlay upgrades in the US across their lineup. Check out our update on the CarPlay retrofit for details.

Mazda’s now offering Apple CarPlay retrofits in both Canada and Australia for vehicles all the way back to MY 2014. But they’ve yet to release any similar plans for the US. When will this awesome retrofit come to US soil?

Back in September 2018, Mazda Canada announced that Apple CarPlay would come standard in all 2019 models (save the MX-5). Mazda also announced that, if you recently bought a 2018 Mazda6 or a 2019 CX-3 before the new production change, you can have CarPlay installed in your vehicle for $250 CAD – a steal for an OEM piece of equipment.

Mazda’s awesome CarPlay offerings don’t stop there though. They also announced that they’d offer Carplay for all existing vehicles equipped with the Mazda CONNECT infotainment systems for a cost of $443 CAD. While 2x as much as for the vehicles above, that’s still not a bad price for a dealer-installed piece of equipment.

Will Mazda Offer This Retrofit in the US?

Unfortunately, in the US things are a bit different. Mazda has already announced they’ll include CarPlay in the 2019 CX-9, but they haven’t yet spilled the beans whether or not they’ll offer the CarPlay retrofit for all the models above.

With Mazda offering the upgrade in both Canada and Australia,we can only assume (or hope) it’ll eventually make it to the US. One good sign: Mazda itself admits that Mazda CONNECT is basically the same the world over.

We really can’t see any reason they wouldn’t offer this CarPlay retrofit in the US – unless they have a deep loathing for their customer base.

Mazda isn’t completely quiet on the home front though. As of November 2018, they have confirmed that they’re offering a CarPlay retrofit the 2018 Mazda6 – and for free!

2018 Mazda6 Owners Can Already Get a Free Retrofit

If you’ve already got a 2018 Mazda6 – you’re actually in luck! Starting in September, Mazda dealers across the US began offering CarPlay/Android Auto retrofits at no cost. The free retrofit is only available for certain trim levels, so if you opted for the Touring, Grand Touring, Grand Touring Reserve, or Signature, you’re good to go.

Mazda first announced this awesome deal back in a Julypress release. For the retrofit, you must bring your Mazda6 into adealer and the procedure includes both hardware and software upgrades and takesabout two hours to complete.

So if you’ve got a 2018 Mazda6 (of one of the trim levels above) but don’t have Apple CarPlay – go to your dealer today and get it for free!

Beginning in September 2018, Mazda will offer CarPlay in 2 models – the Mazda6 sedan and CX-9 SUV.

Despite Apple introducing CarPlay way back in 2014 and almost every major manufacturer adopting the technology in all or part of their lineups, Mazda and Toyota have been the hold-outs, refusing to support CarPlay in their vehicles.

Finally though, that’s all beginning to change. Toyota has adopted CarPlay for the 2019 Avalon and – thankfully – Mazda is finally offering Carplay in their flagship Mazda6 sedan and CX-9 SUV. However, it’s not every trim level and no one’s still quite sure exactly what they’ll offer in the future.

In July 2018, Mazda North America announced that, starting in September 2018, they would offer free upgrades for Carplay (and Android Auto) retroactively for all trim levels of the 2018 Mazda6 except the most basic Sport trim.

Kudos to Mazda for this awesome move, as they’re only the 3rd manufacturer to retroactively offer CarPlay in an existing model, following the path set by Ford and Hyundai. With CarPlay, Mazda6 owners will now be able to more safely access Messages, Apple Maps, Music, Podcasts, and a handful of other preapproved Apple and 3rd party apps.

Mazda notes the process should take about two hours, and will also include installation of a more powerful 2.1 amp USB port as well as the latest version of MAZDA CONNECT, Mazda’s proprietary infotainment system.

With MAZDA CONNECT, you’re able to switch between your phone and the radio intuitively and without distraction says Mazda, which fits pretty well with CarPlay’s own goal of safer driving.

The Mazda6 is the first Mazda vehicle in North America to feature Apple Carplay integration. And we can probably assume the 2019 Mazda6 will also feature Apple CarPlay, but until Mazda publishes the stats of the new model we’re left to simply assume. However, we’re not at a total loss, as Mazda has already announced the 2019 CX-9 will most assuredly feature Carplay right off the lot.

The 2019 Mazda CX-9 is the first Mazda to feature CarPlay off the lot. Available in early September 2018, CarPlay will come standard on Touring trim levels and above (like the Mazda6). This crossover SUV will also feature the MAZDA CONNECT infotainment system and a 7” screen (8” for the Touring model). You can control via the touchscreen or knobs and dials located on the console.

Like the Mazda6 above (as well as any vehicle with CarPlay), CX-9 drivers will be able to simply plug in their phones with the lightening cord and see a simplified Apple menu on their screen, replete with driving-friendly apps.

How to Use Mazda Apple CarPlay

From there, you can open and close apps, find directions, send texts, open audiobooks, and anything else you’d need while driving via the touchscreen, knobs and dials, or voice command. That’s about it – nice and simple!

Mazda, Apple CarPlay in the Future

Beyond the Mazda6 and CX-9, Mazda has yet to reveal their long-term plans for incorporating Apple CarPlay into their other offerings. Hopefully they’ll continue to roll out the technology across the entire lineup as most other major manufacturers have. Chevy, for example, includes CarPlay in well over 20 models, while Honda offers CarPlay in 7 and Hyundai in 11.

Way back at a press conference in early 2018 – before they’d announced the Mazda6 CarPlay retrofit – Mazda gave a very nonspecific announcement that they’d start offering CarPlay for the MAZDA CONNECT system, without mention of any specific models.

As we’ve seen above, they subsequently began offering Carplay for the 2018 Mazda6, but the manufacturer introduced the MAZDA CONNECT infotainment system back in 2014, so there’s a huge backlog of used vehicles that could possibly be eligible for a CarPlay upgrade. Mazda has yet to further comment on this, so we’ll just have to wait and see exactly which models they’ll offer up for CarPlay.

Mazda has certainly arrived late to the CarPlay party. There’s no doubting that. But it’s never too late and they’ve taken some great first steps. Let’s hope they continue on this path.

In the latest Apple CarPlay news, Lexus’ first model with CarPlay is a Lexus ES. Toyota (who makes Lexus automobiles) is traditionally conservative, but the wait for Lexus models to gain CarPlay was glacial. Also, Toyota promises CarPlay in the upcoming Avalon, Corolla, and RAV4. Three cheers for Toyota for finally adopting CarPlay!

END_OF_DOCUMENT_TOKEN_TO_BE_REPLACED

CarPlay is an Apple thing, so you’ve got to have an iPhone. CarPlay compatible: